How fast a year goes! 2019 was certainly my best year yet, with tons of travel leaving me with some amazing photo opportunities and a dramatically lighter wallet. I was lucky enough to photograph bears in British Columbia, lions and owls in Africa, native birds in New Zealand, and then "just" local species in Pennsylvania and New Jersey.

As always, it's tough to cut it down to just 10 images from the year, especially one as good as this, but, without further ado...

At #10 is an image I didn't even know I took until after the fact. Each night the gates to the Kruger (see more images here and here) camps closed at 5:30pm whereas sunset was about 5:20pm. Of course most of the animals we wanted to see (and the best light to photograph them in) are active right before sunset. So each night, there was a bit of a race against the clock to be in the area of the camp at around 5pm while still leaving enough time to take advantage of a good sighting if we happened across one. During these drives back I would rattle off silhouettes of trees with the setting sun with a 70-200mm lens while J drove back. This particular night's race was tighter than we anticipated due to getting stuck in an (unsuccessful) leopard jam, so much so that when I noticed a backlit Pearl-spotted owl in reasonably close range, we didn't have time to stop. I was happily rattling off silhouetted shots this whole time, and it wasn't until we got back to camp that I realized I had actually photographed the owl, with a nearly set sun to boot. This story sounds 100% made up, but it's really true! It's definitely better to be lucky than good.

2019 was a busy year both in terms of photography, travel, and work. Harriers hold a special place in my heart but for a different reason than other species -- they are infuriating to photograph, always flying away or giving weird wing positions or head angles. I probably have more pictures of harrier butts in flight than anyone else. But...they are beautiful birds and locally occurring every winter, so every winter I try for them. I had seen them popping up on eBird for a couple weeks but hadn't gotten a chance to check them out between various fellowship applications. The day I finished my last one I went out to my local park...where I struck out for about 2 hours. With the sun setting I decided to check out another preserve. Upon opening my car door this juvenile banked by allowing for an underside view. I hadn't gotten this pose before and I was (am) thrilled.

This is a shot I've had in my head since first seeing this species on my first trip to New Zealand, and one I really wanted to capture on my most recent trip. Technically, this was a challenging image to make as I needed soft diffused light to bring out the beautiful array of colors on the bird, a significantly darker or shadowed background, and a light enough (while still cloudy) day to allow me to shoot at a relatively low ISO to preserve dynamic range in both the white throat wattle and the black feathers. I actually tried this shot multiple times and wasn't really satisfied with the background or the exposure on the wattle or other nitpicky things, but in the end it came together and made one of my favorite images of the year.

2019 was a year with a lot of travel for me which in tandem with some bad luck, some late migrations, and a heavy workload starting my last year of the PhD, all compounded to lead me to somewhat neglect my local species. Looking for my favorites of the year, this problem was made "worse" considering I photographed (the very hard to beat) bears, lions, and owls on some of my trips. However, Wren occupy a special place in my heart. They're moderately approachable, they call virtually nonstop in the summer months, and they've made a nest in my backyard for the past couple years. Wren take down some impressively large bugs, including this cricket. I loved the look back and the single feather sticking up. But the best part? The antenna clearing the rock by a nano meter -- perfect!

6. Sacred Kingfisher / Kōtare in the rain

I really enjoy photographing in the rain -- it adds a lot to the images, I find it's a lot easier to approach skittish birds, and there are rarely other people around at parks on rainy days. The week I was in Auckland called for a couple rainy days and given the New Zealand kingfishers seem more active before and during rain that seemed like a winning combination. I actually had a lot of success with these birds over a couple of days, but this image of the bird on volcanic rock stands out to me.

After a couple of years of convincing from my friends and J, I finally caved and went to Gorongosa National Park in Mozambique. In actuality it didn't take much convincing at all and I was really curious and excited to see the park after having three of my friends doing their field work there and hearing their stories. Gorongosa is interesting in that its ecosystem was devastated by civil war resulting in the extirpation of pretty much all large mammals, including  carnivores. Currently there are lions, and African wild dogs have just been reintroduced, and the large herbivores, like elephants and buffalo, are slowly recovering. Although many of the 'characteristic' African species such as leopard and zebra are missing or at very low population levels, the sightings and encounters in the park were incredible. Not only was there amazing scenery, wildlife, and settings, but given that there's no self-driving in the park, there were no lion / leopard / "I'm pulling over because you pulled over" car jams, making the wildlife viewing (see more here) far more enjoyable than in Kruger. This was one such experience. J, Matt, and I had the pleasure of watching five lions -- one adult and four first year cubs playing and gearing up to hunt after sunset. The light was obviously low which gave them wide open eyes. The best part of the sighting was when two of them jogged in our direction, allowing for one of my favorite shots of the year. 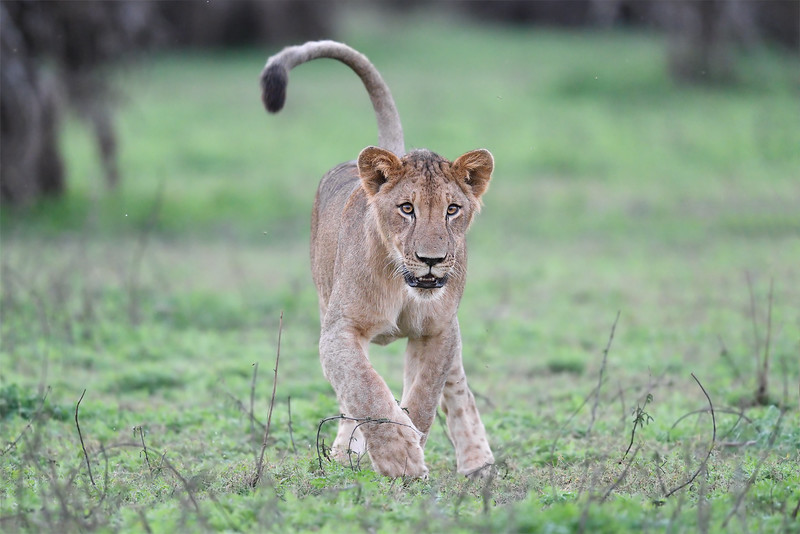 4. Grizzly bear in the rain

As mentioned above, I really enjoy photographing in the rain and the prospect of doing so with grizzly bears was really exciting. The weather before traveling to the Khutzeymateen, a preserve in northern British Columbia, was rainy -- perfect. Of course one thing about BC is that the weather changes pretty much constantly, so in the end we had clouds, sun, and finally on the last day -- rain! During one of the rain storms we had one of my favorite sightings -- this mother with two young cubs. She was relaxed laying on this log while her cubs ate sedge grass before standing up. Something had caught her attention. She took off with her cubs and a few minutes later a dominant male grizzly emerged from the forest. This frame taken at the height of the drama was one of my favorites of the year.

Another image from Gorongosa, we were watching the sun set on the Sungue river when we spotted these three African openbills in the water perfectly silhouetted. I took a couple of images of them just feeding before they got spooked and two took off. I loved this image for two main reasons: 1) it almost looks like a composite, but it was all one capture, and 2) you can see the light through each of their bills, demonstrating their name well. See more avian images from Gorongosa here. 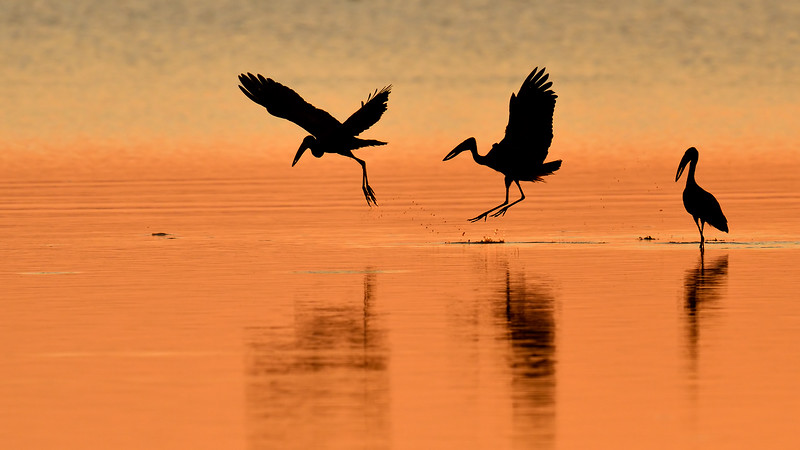 At #2 is probably my favorite spontaneous sighting of all time -- finding an African barred owlet is (in my opinion) a great setting in Kruger National Park. We were driving along and caught this shape getting mobbed -- a sight worth reversing the car for. It slowly turned its head 180 degrees allowing for 1) a definite identification as an owl (although we thought it was a Pearl-spotted owl) and 2) some head-on images. Despite getting dive-bombed by small passerines this owl seemed totally at ease being photographed. Best of all, perhaps, was having the sighting totally to ourselves for about 15 minutes before leaving the owl just as relaxed as we found it.

It maybe seems somewhat anti-climatic to end with this image. After some of the more drama filled images, to conclude with a peaceful grizzly bear almost seems a bit baffling. But that's exactly why I like this image. Grizzlies are generally pretty calm animals -- our idea of them as brutes (which they absolutely can be, with each other and with us when pushed!), is built on encounters centered on our own historic brutality towards them. So to observe one completely relaxed and just doing exactly what bears do is really special. This setting to me is perfect -- nice flowers, a clean background, and best of all, a relaxed bear! This image is exactly what I wanted to capture on my trip to BC, and ultimately it is my "top image of 2019".

Overall, it was a great year with a lot of really amazing sightings and encounters. A lot of these images required a lot of planning ranging from getting visas to picking the right gear, so big thanks to everyone who helped with that or even just tolerated hearing about it :). A special thanks to my friends -- especially Arjun and Matt, my family, J's family, and of course J.

The plan for 2020 is hopefully foxes and local owls, but I'll take whatever is in store!