Recently I had the amazing opportunity to spend two weeks in New Zealand. Before the trip I had a 'target list' which included easy to locate and see birds such as Gannets and Albatross, song birds such as Tom Tits, and rarities such as the Yellow-eyed Penguin.  I was also hoping that the weather and moon cycle would line up so that I would be able to see the Milky Way. Of course, I wanted to see all the great landscapes as well, and I was definitely more confident that I would be able to find Mt. Cook.

Prior to leaving, a bird photographer friend of mine told me that New Zealand is a landscape photographers dream but that the bird photography there is HARD. Her summary proved to be completely true, with many birds being skittish, under dark forest canopies, too far away, or all three.

Despite this, I was able to see pretty much every species that I had hoped for. The only one I didn't get to see was the world's only alpine parrot, the Kea. But given the rest of the trip, I can live with that.

All photos were taken with Nikon gear and processed in Nikon Capture NXD or Adobe Lightroom, and Adobe Photoshop CC 2018.

First up on the agenda was the Muriwai Gannet Colony, about 40 minutes west of Auckland. The set up here was actually pretty similar to the Puffin colony I visited in Seahouses, England (read more about that here). The birds all nest in pairs along the cliffside and then one parent goes out to sea to catch fish. When they've successfully gotten their fill, they return to the nest. This gives you a ton of opportunities to capture in-flight shots.

Besides getting a lot of opportunities, you also get the choice between an ocean background (as below and above) or a cliff-side background.

In general I love photographing at colonies like this (Gannet, Puffins, Terns, etc). Besides having a ton of chances to get a good shot, you can often get very close to the birds without adding any stress since they are relatively habituated. I shot the whole day using the humble (for avian photography!) 300 mm focal length (read my 300mm lens review here), and at times that was even too much (see below), although I think that this shot  really highlights the detail and how aerodynamic these birds are when landing. 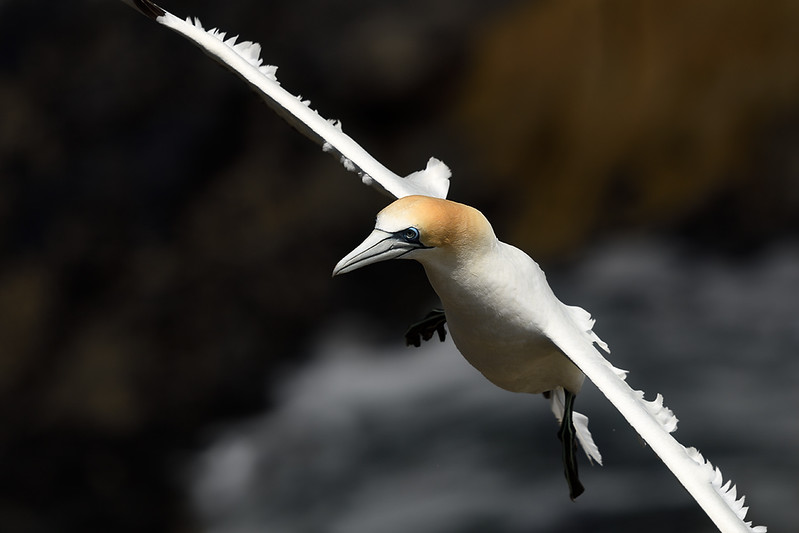 After the Gannet colony and my first day of New Zealand sunburn, it was off to Tiritiri Matangi, a wildlife sanctuary / conservation project in the Hauraki Gulf. The small island actually used to be farmland until recently, but has now been converted to forested and grassland patches for New Zealand's native birds and mammalian predators are strictly controlled.

This was one of the spots that was especially difficult to photograph as there are mainly small, jumpy birds in really dense, dark forest. One such species is the Fantail (below), a small insectivorous bird that follows people along under the canopy. Note the spider web in the upper right hand corner of the frame. Along with Fantails, we saw Tui, Red-crowned Parakeet and Hihi, among others not shown here. In fact, pretty much every single bird I saw was a lifer for me, including the Bellbird below.

After Tiritiri, and some amazing lamb shank, it was off to the South Island. After landing in Christchurch,  we headed over to Mt. Cook National Park and the Tasman Glacier, via Lake Tekapo. Besides some great landscapes, this park is home to some of the world's darkest skies, with the Milky Way being clearly visible with the naked eye, and certainly visible in the shot below (along with airsheen, the green 'haze').

Later in the night, as the sun came up slowly (bottom right corner), a bit of light started to illuminate the grass and mountains.

The next morning we hiked the Hooker Valley track towards Mt. Cook which provided some equally amazing views. 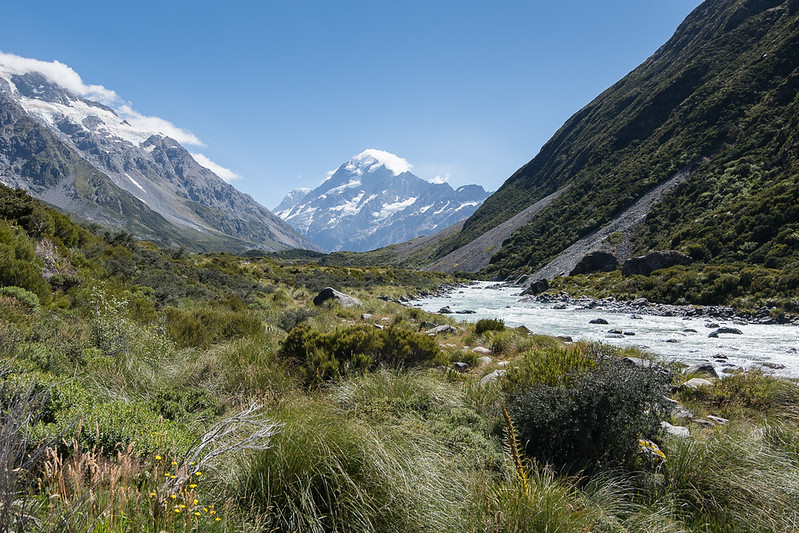 That night, I used a head torch to illuminate a tree in the foreground of the below shot.

After Mt. Cook, we headed down to Queenstown. One of the birds I was hoping to see was the Great Crested Grebe and there were 3 or 4 locations on our way that had had recent sightings. The first one was unexpectedly next to a salmon farm, which seemed less than promising. Of course, as is often the case,  this actually turned out to be the only spot we found them and, more importantly, after laying in the grass for a while, they ended up getting reasonably close.

These birds are exceptionally good parents, with one parent carrying their chick and the other constantly hunting small fish. Here you can see the chick hitching a ride with dad. 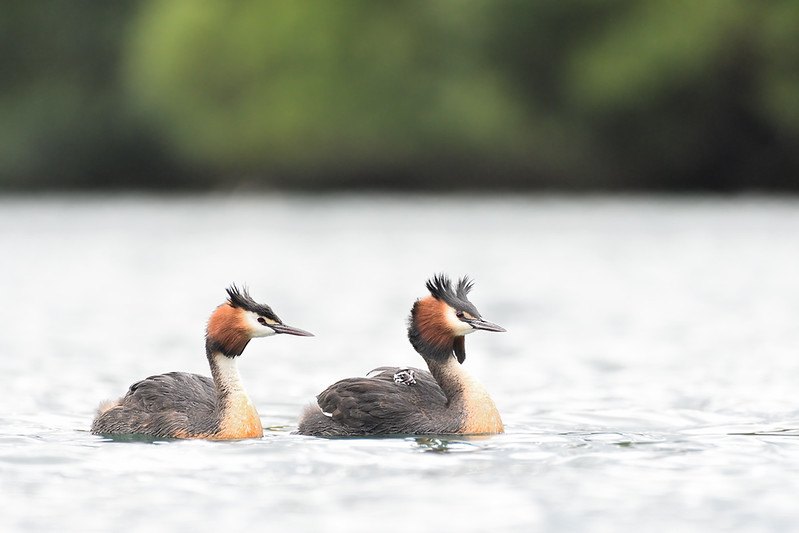 After about an hour or so we let the Grebes be and went to check out some other spots, but not before the chick gave a little yawn, tired from....not sure what. 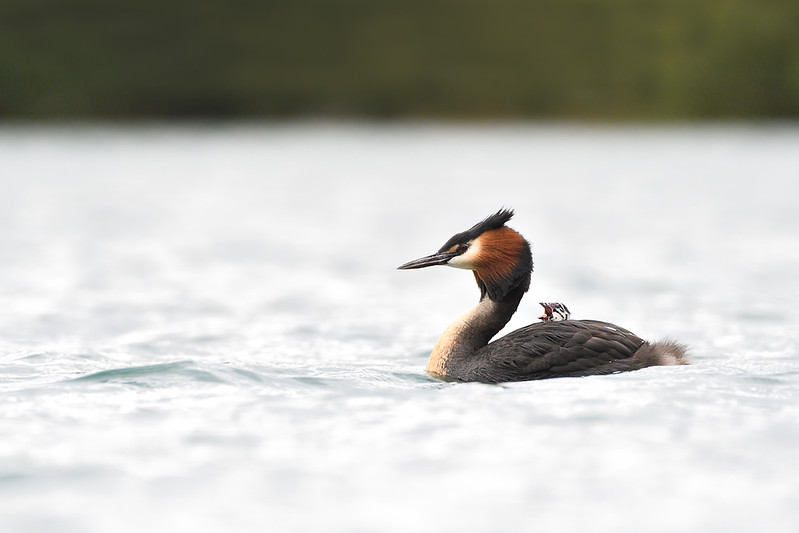 Another stop on the way to Queenstown was the social media famous "Wanaka Tree". While many other (and more dramatic) photos can be found online, it's hard to go to New Zealand and not post a photo of the tree.

That night our campsite was near Lake Wakatipu. I was hoping for some more Milky Way opportunities before the Moon became too full. Unfortunately a rogue cloud somewhat spoiled the party, but between the water, cliffs, and great night sky, I thought this was another example of the great landscapes New Zealand has to offer.

Next, after a day of driving, we finally made it to Cascade Creek, a campsite on the road to Milford Sound. After a long wait and a great burger before we left Queenstown, we settled in at the campsite which had a number of cool trails. The environment here really resembled the Pacific Northwest, with just tons of moss on everything.

The trail we took cut through the forest had a number of resident songbirds. It was super dark under the canopy, making photographing small, jumpy birds difficult, but I was happy to see and get a shot of this South Island TomTit.

Unfortunately the clouds put an end to anymore Milky Way plans that I had, but it did give a nice sunset and an idea of the type of forests here.

The next day we visited Milford Sound (technically a fiord), a pretty popular New Zealand spot and you can really see why. Between the mountains and water leading out to the ocean, it really is gorgeous. The water had a really cool fog on the surface that you can see here below. 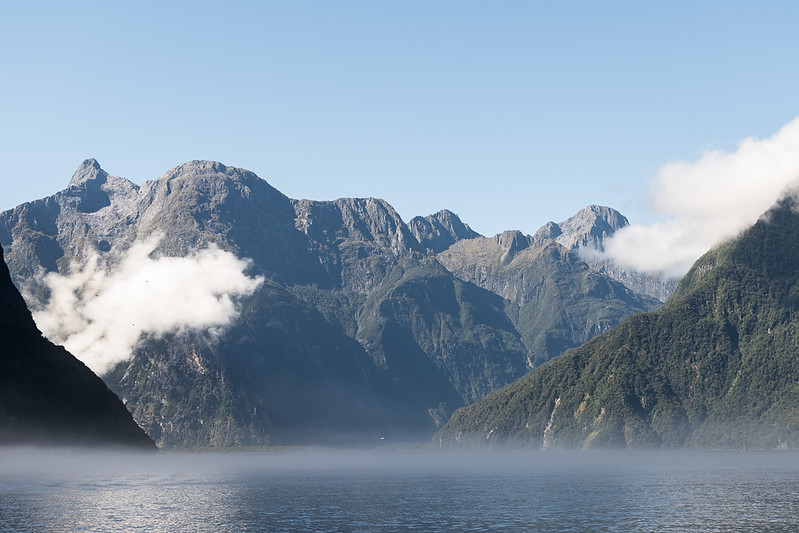 Heading back to the campsite from Milford Sound, we tried a couple spots for the native Blue Duck, a relatively rare river duck. Unfortunately, pretty much every spot we tried had just unloaded a tour bus-sized group of people, making it near impossible to see these skittish birds. Right about to give up, we were sitting by a stream when one literally just popped it's head up and climbed onto a rock. Pretty good luck! 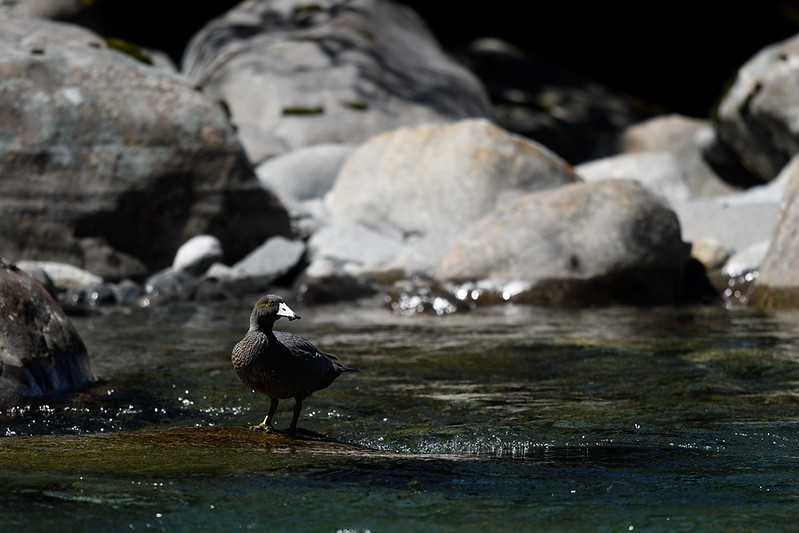 After Milford Sound, and once in Oamaru, it was a full court press on trying to find some penguins. The two species present there are the Little Blue Penguin, and the Yellow-eyed Penguin. I was most interesting in finding a Yellow-eyed Penguin as, at 4,000 total, it is the rarest penguin in the world.

Unfortunately due to it's rarity, it is difficult to find and extremely difficult to get close to, especially at eye level. I found a spot that seemed promising and a fellow bird photographer friend had told me about. I went in the morning and did see two (not pictured) but they were at somewhat of an angle and in harsh light. I returned that afternoon and waited for about 4 hours hoping one would come up to a lone spot where I would be eye level. I ended up getting lucky with a very photogenic one (below). Along with the 'standard' frames, I was happy to get a picture of him calling out, and taking care of an itch on his flipper. Adorable. 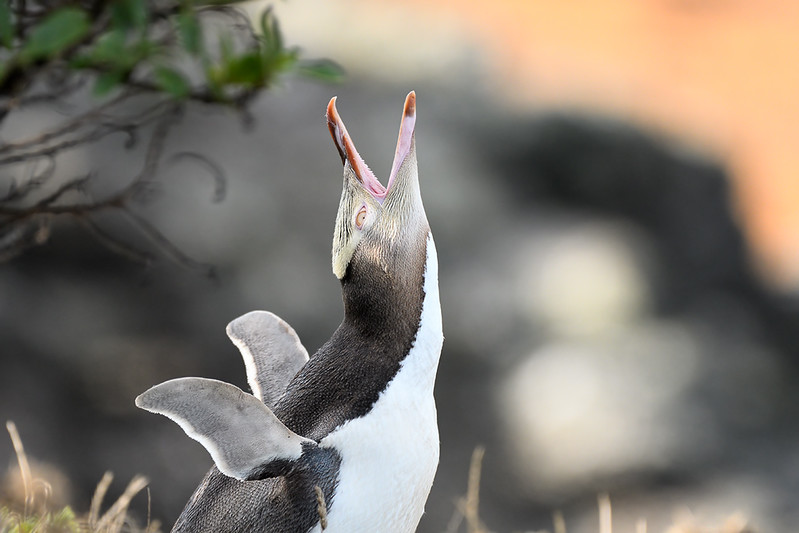 After the penguin stopped calling, he quickly settled in. 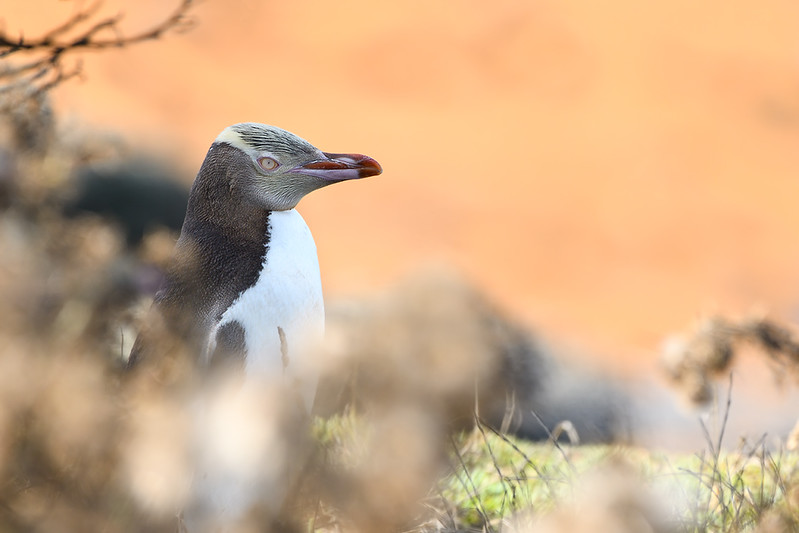 And scratched a bit of an itch. 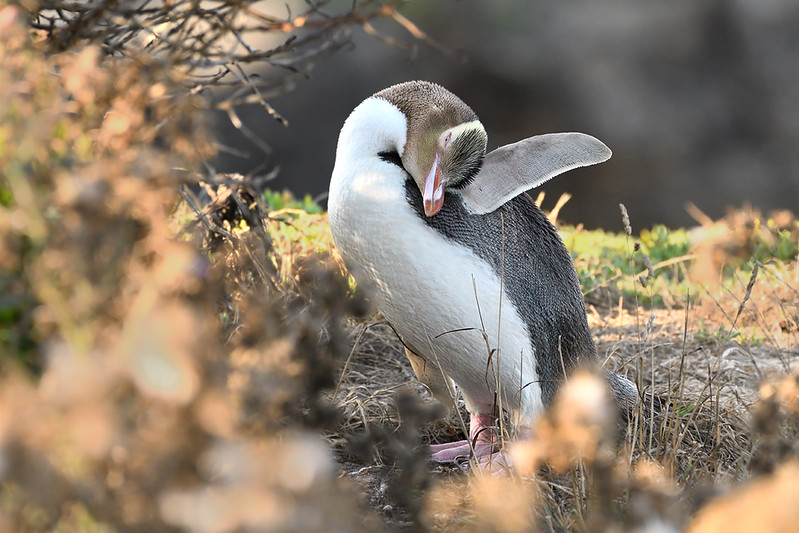 After the excitement of seeing a Yellow-eyed Penguin (a sentence I never thought I'd say...), I left Oamaru and headed to Kaikoura for a pelagic tour with the goal of seeing shearwaters and albatross. I had never photographed off a boat before and tend to get seasick so it was interesting, to say the least. The first pelagic went out despite being super foggy, making photography tough, but it was unreal to have such low visibility and then see a massive albatross with a 10-foot wingspan appear out of seemingly nowhere and land just feet away. You can see how close they get from the photo below.

This albatross is dwarfed by the Royal Albatross, the world's largest, as seen below. Albatross look extremely smooth when they fly, giving their heads an almost 'detail-less' look. Very cool to see in person, but not as fun when trying to edit photos. 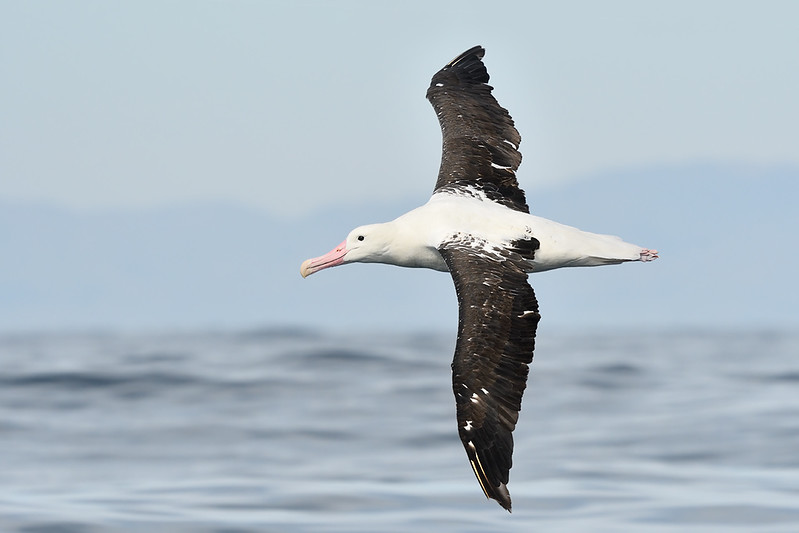 While the Albatross worked on the chum, petrels (pictured below) would wait patiently for bits of scraps. At about a foot long, they were cautious around the much larger visitors. Also, being so small, they are near impossible (for me) to photograph in flight while on a moving boat, so I was happy to get the following frame.

On the second pelagic, I actually ended up seeing a Little Blue Penguin off the side of the boat. Too far away for a photo, but cool nonetheless. After the pelagic tours it was back to Christchurch to begin the long trip home (Christchurch to Auckland to Los Angeles, and finally to Newark). You can see more of my bird photos in this album and more of my astro shots here.

As you can probably guess by this point, I had an amazing time in New Zealand. I want to thank Pru, Glyn, Tom, Polly, Josh, and Helen for their hospitality, for hosting me, and a great lamb dinner. Richard Atkins, and Matt Jones and Sav Saville from Wrybill Birding Tours for giving amazingly spot-on advice on where to find certain species and info on the pelagic tours. And of course, Justine for tons of planning, great company as always, and making sure I survived driving on the left side of the road.