Some tips and tricks for low light bird photography

Imagine you're out photographing birds or other wildlife and the sun has gone down. You're heading back to your car, probably thinking about what you'll have for dinner, when suddenly a bird lands close to you. Maybe not the rarest bird but you want this photo. It's low light, so you have a low shutter speed and high ISO, and to make matters worse your autofocus is getting worse by the second as the sun sets further and further behind the tree line. This is a low odds situation. So what can you do to improve them and give yourself the best chance at nailing the shot?

This was exactly the situation I found myself in with a Kinglet. These birds are tiny, generally on messy perches, and very quick and jumpy. So when one landed right next to me on a clean branch with a nice background just after sunset I wanted to take advantage of the situation. I made some quick adjustments and got the shot (shown below). Here, I'll walk through some of these low light tips and tricks. 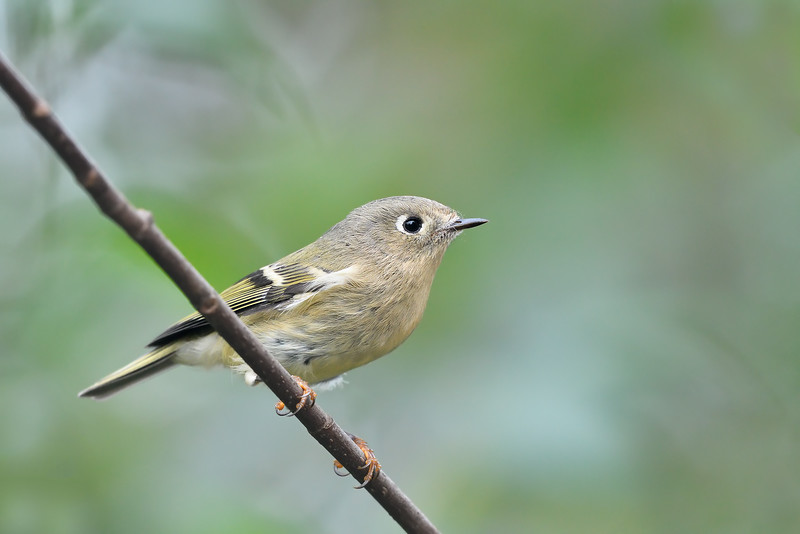 This one seems obvious but I'll break it down into a couple parts. I'm assuming here that the more basic knowledge (shooting in RAW, etc) are down pat already.

1a. Shutter speed, f-stop, and ISO (or, just exposure)

In low light conditions underexposing a shot is more or less a recipe for disaster. Therefore getting the exposure right is the first thing to consider. So back to the scenario. It's dark and you have a jumpy bird. In nice light, I'll shoot passerines at 1/2000 f/6.3 and ISO 800 or so. It I wanted to use that shutter speed and f-stop I would be past my cameras limit of ISO 51,200. So not only would the image look like TV static, it would also be underexposed! The horror! Those settings aren't going to cut it. I switched to Auto-ISO at +0.7 EV, enough to exposure the darker plumage on the wings, but not enough to blow the highlights under them. I'm comfortable shooting my D500 at ISO 5,000 (this is where knowing your camera, and post processing which we'll get to below counts!) so I adjusted the shutter speed until I got there. Once I hit 1/200 of a second and saw ISO 5,000 pop up, I was set.

So the camera is raised, exposure is set, the opportunity is slipping away, so time to fire right? Not yet! What good is a well exposed photo that isn't focused?

For perched birds I generally use the smallest AF area I can with some point expansion, or even just single point AF so I can make sure the head, and importantly the eye, are sharp. But I've found on my Nikon body this single point and expansions modes can hunt (not lock quickly) in low light. To make matters worse I was previously focused far away, so to go from ~30m to 3m is just asking for trouble. So to get around this, I switched to Group AF, a setting that I typically use for birds in flight and tracking movement. This mode is great at locking on, but it'll only lock onto whatever is closest. Not so great if you can get in focus wing but soft head. This Kinglet turned, shifting the focus point from the rump to the head. Success! Although this was in some ways riskier than using single point mode, the AF locked onto the bird immediately, something I doubt would have happened without using Group mode.

Okay so we've made adjustments to exposure and AF, we have to be ready to go now right? One last thing...

Setting your camera to it's maximum FPS seems obvious, but earlier in the day I was shooting on my cameras quiet mode which limits me to 3 FPS. I quickly switch to continuous high, giving me 10 FPS. I rattled off 7 shots of this bird, with the final shot being just an empty stick after the bird had flown away. These poses, along with the active AF point are shown below. Note the variable ISO as a consequence of Auto-ISO. Of these 6 images, 3 had poor head angles, 2, were soft due to motion blur of the bird, and one was sharp with a good pose (highlighted below).

So you've shot off a bunch of frames and now you're nervously checking them. "Did any of them come out??" you ask yourself, and possibly everyone around you. To your relief, one did -- success again! You examine the 100% crop (shown below) because you're an obsessive pixel-peeper (otherwise you wouldn't be reading this blog) and are aghast to see not only a noisy photo (ISO 5,000 on a crop body remember?), but some weird color casts. Your prized Kinglet is almost purple! To make matters worse you almost faint as you realize that the highlights on the shoulder are hot, and lack detail.

Okay so again while post processing, especially at high ISOs, seems obvious, let's break it down.

Having an off white balance is pretty common for these low light shots in my experience. Thankfully, it's not so hard to fix. There are a number of ways, but I like using the eye-dropper technique, often on the beak or some 'neutral' area of the bird. That's what I did here, transforming the image as shown below. Move your cursor over the image to see the before and after.

Again, a seemingly obvious thing, but 1) you have to do it, and 2) this ties into the whole 'know your camera thing'. If you downright dismiss shooting at high ISOs because you think you just shouldn't you may miss some great shots that you could have nailed with some delicate post processing.

I've discussed some NR tips in this blog post so I won't restate that here, but the NR plus WB edits are shown below. Of note, the detail in the original capture is still there, but most of the grain is removed. There is still some left, but it's tightly grouped and clean in out of focus areas (the background) and areas that don't contain much detail (the eye).

This final step is just bringing color and depth back into the image via contrast, saturation, and any of the other sliders. I made a highlight adjustment of -20 here as well as dropping the exposure a bit to bring back detail into the white wing feathers. Adding about +20 points of saturation gave it the final RAW some pop (below).

Now we can wrap up the image processing with whatever creative edits you would like in Photoshop. I removed an out of focus stick in the corner, although I know that type of editing isn't some peoples thing. I did a bit of selective work on some areas before sharpening the image for final presentation, shown below.

And that's pretty much it! It may sound like a lot, but all in all these are pretty minor tweaks to a shooting style and workflow. The in camera tips consisted of clicking shutter speed down and switching to Auto ISO, switching focus modes, and turning on maximum FPS. The editing processing primarily focused on adjusting white balance to reflect a natural color, and correcting for high ISO noise. There would have likely been a time where I would have looked at that noisy, near purple file and binned it. But a couple small adjustments and I have an image that while may not set the world on fire, I'm pretty happy with, and I'm glad to have the most out of a limited opportunity under tough circumstances.

Hopefully these tips help, and next time you're faced with a short, low light encounter, you can remember a couple of these tips to help you 1) nail the capture and 2) achieve a clean final result.