Puffins are easily one of my favorite birds, although it wasn't until a summer trip to Iceland with my brother in 2016 that I actually saw one. While driving the 'Ring Road' we took a detour to try our luck with some Puffins. It had just started raining when we got there, but we still got about an hour or so with them before having to continue on with the trip.

At this point, I wasn't as serious about bird photography and post-processing, but I was thrilled to get the below shot of a Puffin with the light rain streaks looking off into the distance. I was totally hooked and couldn't wait to see them again. So when I got a chance to go to the UK as part of my PhD I was thrilled (for the research, but also another opportunity to see some Puffins as they can be found in the north UK). 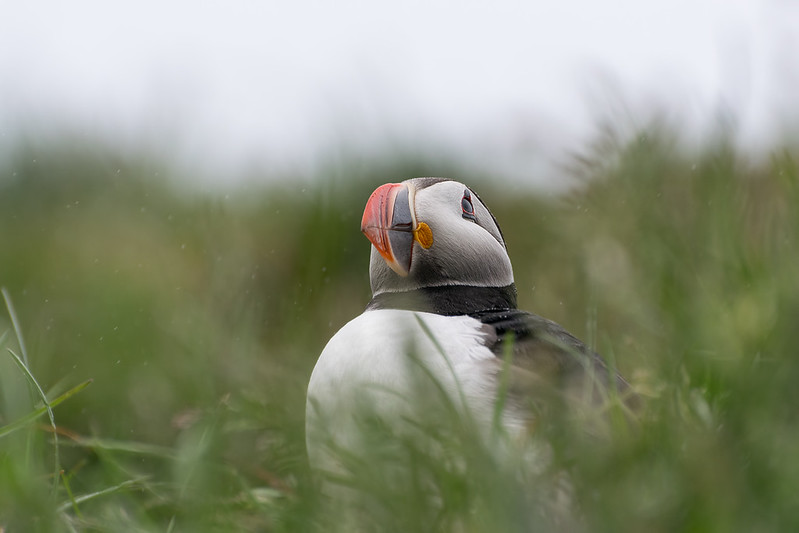 Once I had planned the Cambridge leg of my trip, I turned my attention to the Puffins. A wildlife photographer friend of my mine and total photography guru, Steve Kaluski, pointed me in the direction of Seahouses, a village in north England with population 1,803. Seahouses has two islands about 3 miles off the coast that make up the Farne Islands: Inner Farnes and Staples Island. I booked an AirBnB and three mornings of landings at the islands and was ready to go.

A month later and an easy train up north, I was on a boat, excited to see some Puffins. Although not comprehensive, I had put together a list of shots I wanted to get. Perhaps not the most unique, I wanted to get some Puffin in flight (unoffically PIF) shots, as well as some portraits with sandeels, the small fish that Puffins catch and bring back for their young, who are affectionally called 'Pufflings'.

I quickly realized while trying some flight shots that these birds are complete bullets. It's hard to accurately describe how fast they move and how quickly they can change direction or flight angle. The updated autofocus system in the newer Nikon cameras proved very capable however, especially the Group AF setting.

Although I have shots of them in flight without the sandeels, I just think having a mouthful of them is too cool to pass up. In the below shot, you can see the island's cliff side as the brown section of the background. The slight green on the bird's stomach is from the grass field where the Puffins burrow (instead of making above-ground nests, another cool thing about Puffins).

Farne Islands is especially cool from a photography point of view since when one puffin flies by, you only have to wait about half a second for another one to give a pass. Although they don't always fly close enough, and sometimes they fly too close, it's pretty cool to have essentially nonstop action, something we rarely see at the local New Jersey parks. 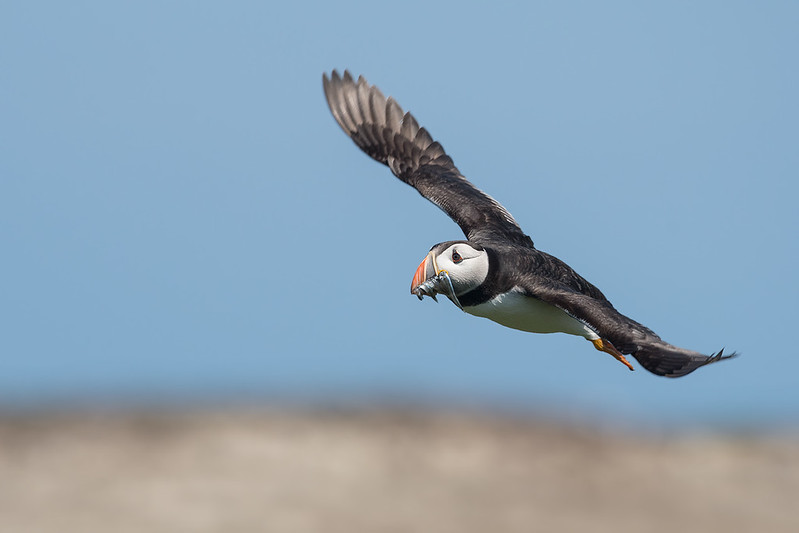 Even on the relatively slow f/5.6 200-500mm lens, the AF motor can drive the lens fast enough (most of the time) to keep up even in head-on scenarios like the image below. On this morning, light had gotten a bit harsher, but I was still happy to get a dynamic head-on shot. Here, the background is actually the ocean and a bit of grass. 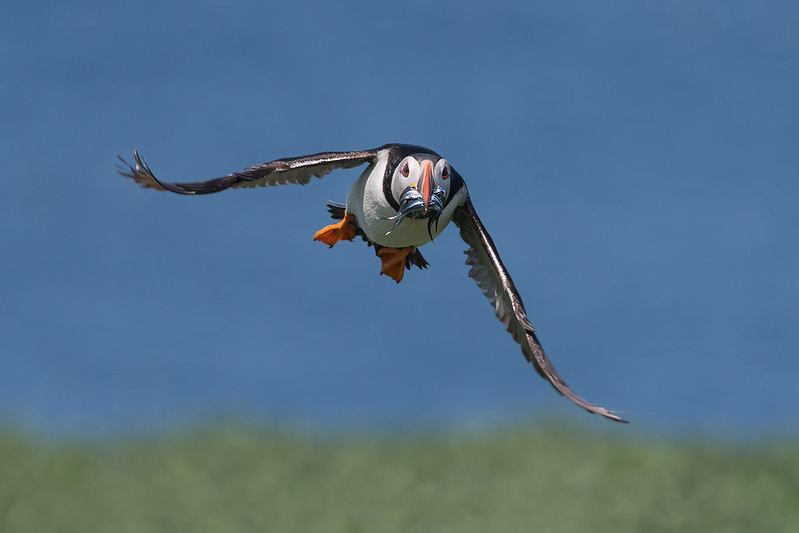 Despite the pretty much never ending in-flight opportunities, the Puffins are pretty photogenic on land. Here, the dark brown background is a shaded cliff wall. 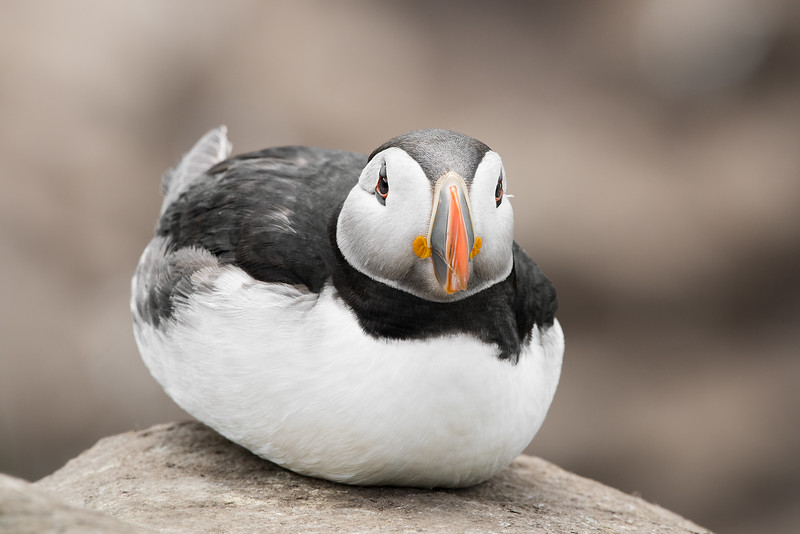 These birds are actually pretty habituated to humans as well, so given a slow and careful approach (with a long lens -- no iPhones!) you can get frame-filling headshots of them. You can make out pretty much every individual barb here, and this shot really highlights how grey their face is compared to the black and white feathers on the rest of their body.

Although most puffins quickly fly back to their burrows when they've made a successful catch, some sort of just...hang out...with a mouthful of sandeels. I didn't see this that much, and I'm not sure why they do this, but when they do it gives a great opportunity to capture just how many fish they can get at once, as well as work the subject for some different angles and backgrounds. 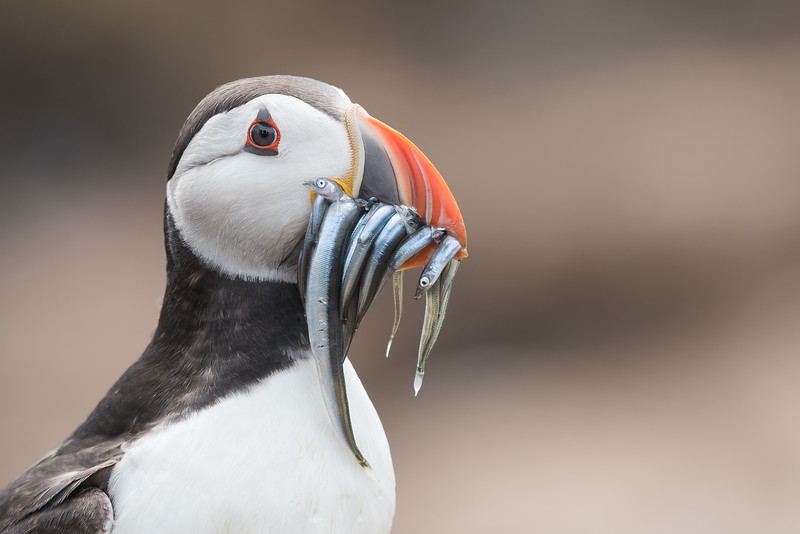 While I really like the brown backyard and profile view above, getting the head-on shot below was really cool. To get as much of the sandeels and bird as sharp as possible, the ISO went way up, but using Nikon's RAW converter, Capture NXD, it was actually pretty easy to remove most of the grain without impacting sharpness too much. 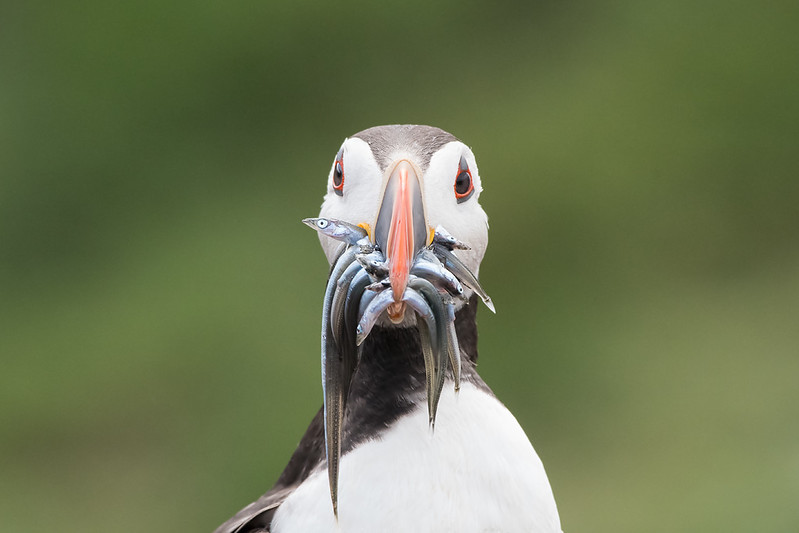 Although Puffins were the main draw of Farne Islands, there are some other great birds on the island as well. I even saw a rabbit, not sure how they got there. Certainly not as photogenic as the main attraction, but I was still happy to catch this Shag having a splash about. 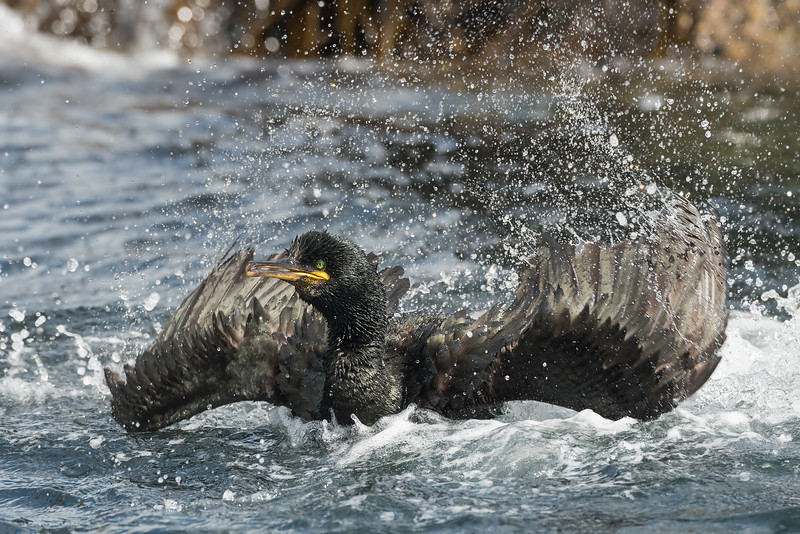 And lastly, I was excited to have a brief chance to photograph this resting Razorbill. Apparently they had had a down year on the Islands and left earlier than usual so there weren't too many around. This one may have missed the memo. They have very dark heads and eyes. Here you can just make out the pupil. Right after I took this photo, he took a snooze. 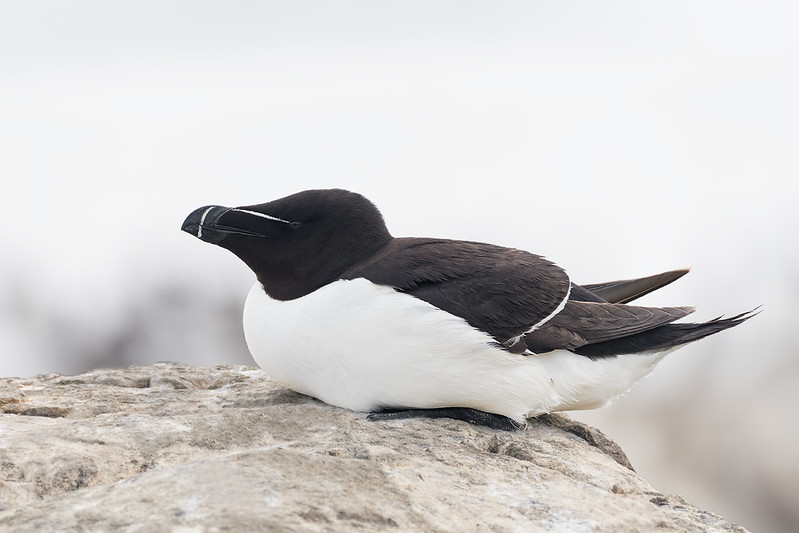 All in all it was an awesome, and maybe too fast, two-and-a-half days in Seahouses, with tons of good photo opportunities. The food there was also amazing, but be warned the portions are huge.

This is, of course, not all the photos taken (most are still to be edited!), but if you want to see more, you can check out my Puffin gallery here. All photos were taken with Nikon gear and processed in Adobe Lightroom / Nikon Capture NXD and Adobe Photoshop CC 2018.

Thanks for reading and feel free to contact me if you're planning a trip there!