I've always been a sucker for photographs of birds in snow, especially when it's falling snow. Just the out-of-focus snow, with any hint of color either from the perch or the bird itself is so cool. But, until recently I didn't have any of those photos. For starters, I was hesitant to take my gear (and myself) out in a snow storm, and more importantly, finding wildlife is hard enough on a nice day.

However, since recently getting into backyard bird photography, I knew I would have a better chance with the 'usual suspects' as opposed to finding something at a park. Finally just before Christmas, a big snow storm was on the radar and I knew I'd get a chance. The next morning my alarm went off at 6AM and it was off to the backyard in a cozy 15 degrees F. It didn't take long for birds to show up, but between the cloud cover of the storm, falling snow throwing off autofocus, and how fast backyard birds are in general, getting a good image was not easy by any means. Most shots were high ISO and low shutter speed, so I was thankful that Nikon has really improved their VR system, especially given that I don't use a tripod.

The first visitor (and by far the most common that day) was a Dark-eyed Junco. It's actually funny since I rarely ever get them perched, they normally just hang out on the ground. But I guess with the falling snow, they'd rather be up higher. Can't blame them. This first shot below was still pretty early in the morning and quite dark , but I liked the various shades of grey. 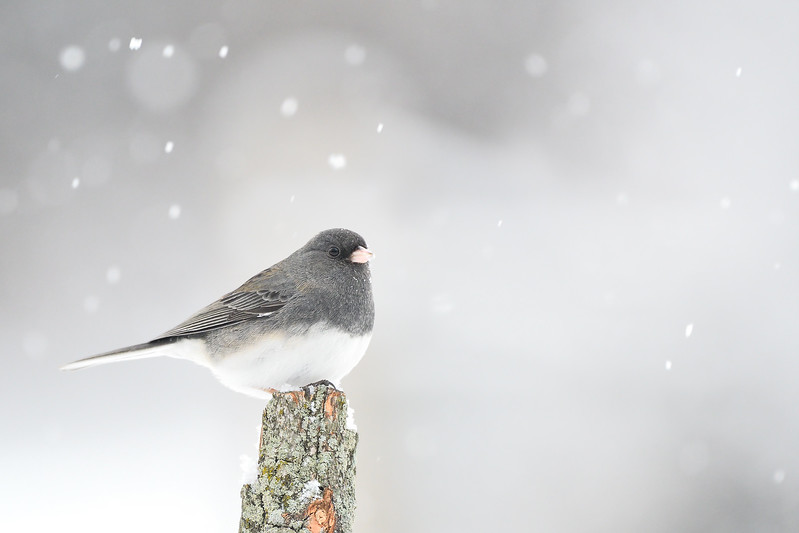 Next up was a pretty aggressive Red-Bellied Woodpecker. I recently read in the Audubon that these birds can be a bit of a bully at feeders and I can see why. Having a pretty monotone bird with some amount of flare (the red cap here) in the snow was a shot I had been thinking about for a while so I was happy to get it. The snow on the mossy perch was just a bonus.

The snow eventually slowed down, giving a more comfortable shutter speed as well as nice high key backgrounds with snow on the perches. I was happy when this Junco picked a perch with some flowers and I loved the bit of snow under the beak, presumably from digging for some seeds. 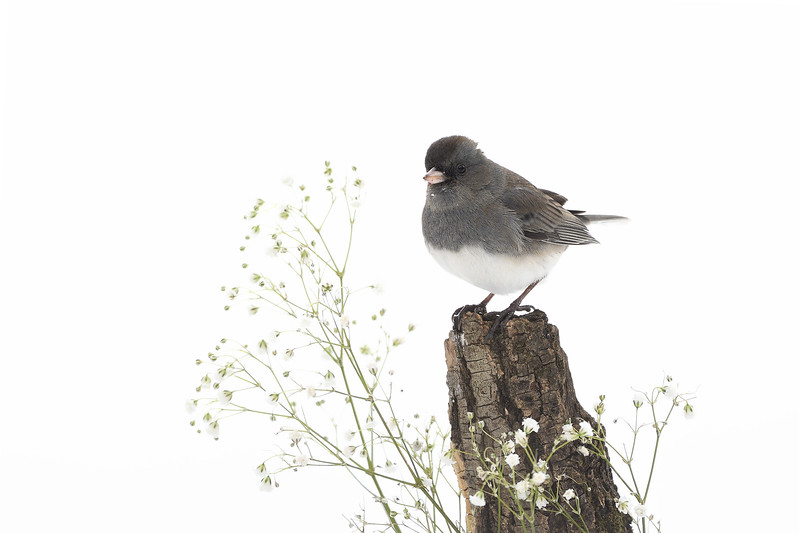 Another Junco, this one landed on some really photogenic berries that I was hoping some Bluebirds would use. 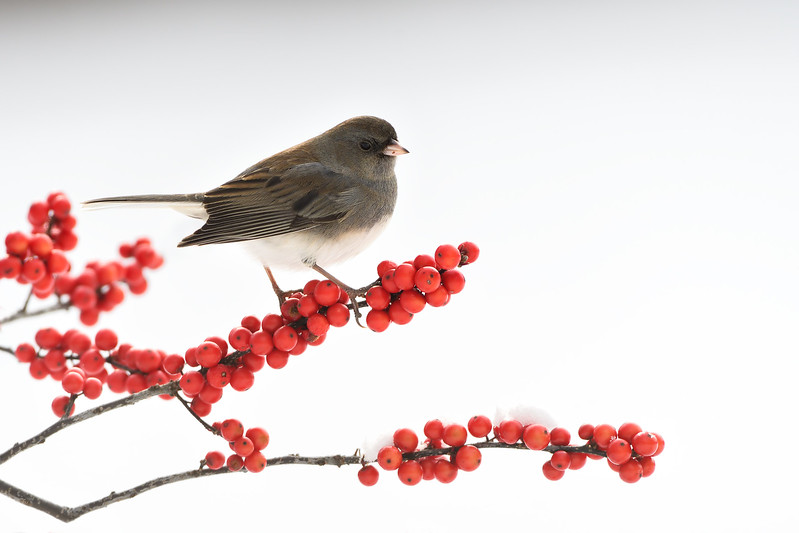 Although Juncos usually don't stay put for too long, this one was unceremoniously kicked off by a Yellow-bellied Sapsucker, a bird I had never seen before in my backyard. You can see where the Junco had been perched in this shot (the upper right hand corner). This sapsucker feasted on some berries for a few minutes before heading off. I packed my bags and headed back inside shortly after.

All in all, despite being freezing and a real photography challenge, I had a total blast. It was a completely different setting than I usually photograph these birds in, and I even got a shot of a new species for me. I can't wait to get another chance it at (hopefully on a slightly warmer day).